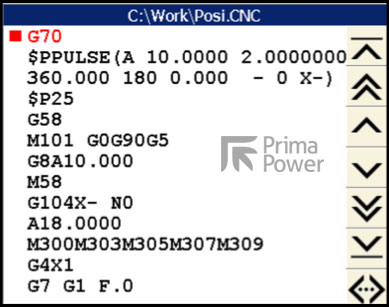 The Advanced Training Classes held in Brooklyn Park during January and February included demonstrations of a number of important but often underused features of the S94P Laser Process Control.

The Program Viewer Panel (Figure 1) displays the active part program, automatically scrolling to show the active block as the program executes. If there is no part program running, the cursor can be moved in the panel to designate a new starting point. However, it is not possible to edit the program from this panel; this must be done using Edit94P.

The ‘Edit Current’ feature makes editing a program faster by allowing you to select the current line within the active program.

) button is pressed, the Search Dialog box will appear (Figure 2).

The Edit Current button will position the cursor in Edit94P to the currently active line in the Program Viewer. Note that Edit94P must already be running for this work.

Checkout the following video clip for an example of the ‘Edit Current’ feature.

In this video, the programmer initially uses the Search function to find the location of the string N4000 in the Program Viewer. Once he finds the line containing the string (code) PRV906, he clicks on the ‘Edit Current’ button. As seen in the video, the cursor appears on the same line of the program within the Editor.

The second feature, ‘Control LPC cursor from editor’, is used both for debugging a new program and for restarting an existing program somewhere in its middle. The latter may be required when a program has been stopped such as at the end of a shift.

It is important to note that once the ‘Control LPC cursor from editor’ box is checked, this mode remains active until the box is unchecked in the Setup menu.

For example, imagine the case in which another operator, who is unaware that the box has been checked, transfers a program without rewinding the program before pressing Cycle Start. Now, the program will start from the cursor location rather than at the beginning, which could result in a crash.

For additional information about these or other features in the newest release of LASERDYNE S94P software, contact us at lds.sales@primapower.com.