It’s another first from Prima Power Laserdyne – SmartPerf™ the application inspired tool for programming and laser drilling of simple to complex patterns of holes in linear and cylindrical paths in 2D and 3D parts.

On-the-fly drilling with SmartPerf is a proven process for percussion drilling small diameter (0.2 to 0.6 mm) holes in turbine engine combustors. All of the Prima Power Laserdyne Nd:YAG and fiber laser systems can drill these holes at steep angles and in difficult-to-machine materials. Thousands of holes can be produced quickly over a 3D surface in a single setup.

SmartPerf is also used for producing patterns of holes involving both trepanning (cutting) and standard percussion drilling (move to a location and create the hole by delivering a sequence of pulses) in addition to on-the-fly drilling. 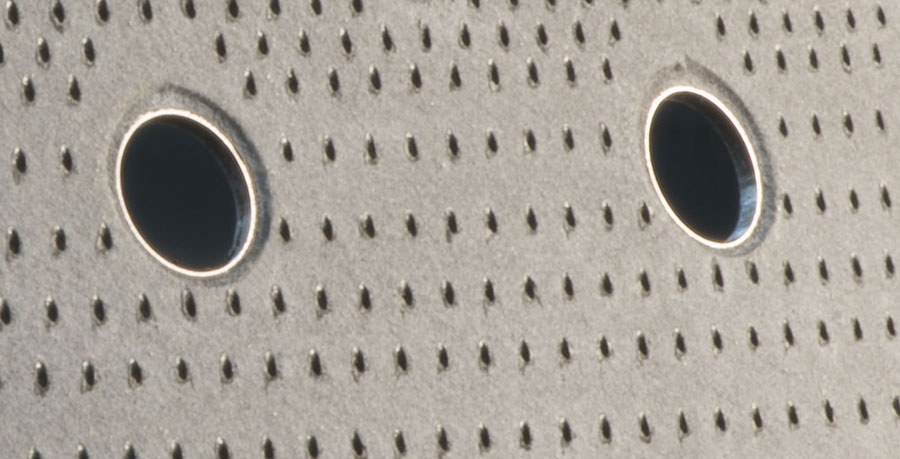 Quality is enhanced because SmartPerf reduces heat input to the workpiece. This is especially important when laser drilling thermal barrier and other coated high temperature alloy metals. When used in conjunction with LASERDYNE SmartPierce, results are even more effective since the process produces less debris, less heat and less part distortion.

SmartPerf broadens the applications for which laser drilling is economical. It enables new laser drilling applications such as fuel filters, noise abatement panels and spinnerets used for the production of synthetic fibers. The new control feature is also useful for laser texturing.

SmartPerf is one of an entire suite of SmartTechniques™ available in all LASERDYNE system models. Users can be confident that their laser processes are more productive, yield higher quality and are more robust. The SmartTechnique™ suite also includes SmartPierce™, SmartRamp™, SmartSense™, and SmartShield™. With Laserdyne’s advanced, integrated control of all laser, motion, and process sensors along with these unique processing techniques, users will achieve ground breaking results.