Shaped holes (right) are produced at varying angles in the contoured surface of this aerospace component (above) using ShapeSoft™ software. This LASERDYNE SP94P control feature is but one of many unique software features of the LASERDYNE 795 and 430BD multi-axis laser systems.

Prima Power Laserdyne’s ShapeSoft™ feature simplifies the creation of programs for producing cone, oblique cone, fan, racetrack and a variety of shaped holes in a wide range of turbine engine components including blades, nozzle guide vanes, and combustors for aero-engine and industrial gas turbine applications. ShapeSoft™ is one of the latest features of the LASERDYNE S94P control, which controls operation of the LASERDYNE 795 and LASERDYNE 430BD multi-axis laser systems.

Creation of a shaped hole at high speeds with ShapeSoft involves a three-step process: 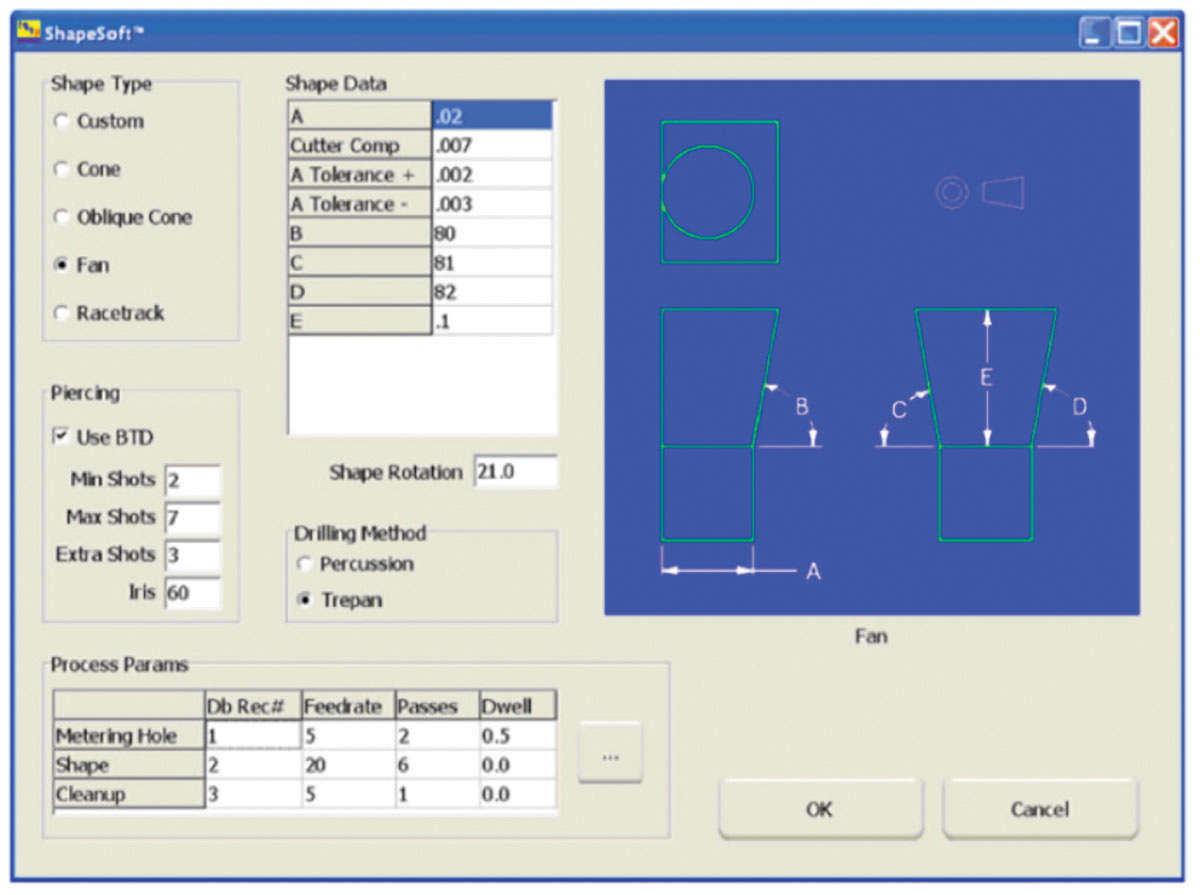 Dialog box for the ShapeSoft™ software feature shows the menu for programming a shaped hole. Note shape type and dimensions, angle of the hole to the workpiece surface, method of drilling, and specification of the laser process are among the selection options for easy programming of the exact shaped hole desired. Illustration of the shaped hole at three orientations (top, side, front views) indicates the dimensions to be entered into the shape data table.

ShapeSoft allows for selecting process parameters for each of the three process steps. Parameters that can be specified are: (1) the parameter database record to be used, (2) feed rate and (3) dwell time after the shutter is open before processing begins.

For Step 1, the number of pulses used for creating the initial pierce if trepanned, or for creating the hole if percussion drilled, is specified directly or can be selected using the LASERDYNE BreakThrough Detection (BTD) feature.

For the shape in Step 2, the number of passes or revolutions around the shape to create the final shape is also specified.

System motion is modified as required to produce the shaped holes at whatever orientation of the BeamDirector or rotary/tilt tables specified in the drilling program. This allows a single shape and single macro to be repeated as many times as needed to produce the specified shape at various locations on a contoured, 3D surface.

ShapeSoft is one of many ongoing significant advancements to Prima Power Laserdyne’s multi-axis fiber laser systems. It gives product designers confidence that new designs using the process are more robust. ShapeSoft has been developed by Prima Power Laserdyne engineers to be easily incorporated into existing laser hole drilling programs.

ShapeSoft is a standard feature within the S94P control used on the LASERDYNE 3 to 7 axes systems which include the LASERDYNE 795 and LASERDYNE 430BD laser systems. It is available for download to existing LASERDYNE system users from the Prima Power Laserdyne website.

“Our goal at Prima Power Laserdyne is to continue to produce advancements like ShapeSoft that help justify the use of laser processing. We make new features available without charge to our customer base whenever possible, The result is that LASERDYNE system users around the world are realizing the benefits of precision laser processing.” stated Terry L. VanderWert, president of Prima Power Laserdyne.