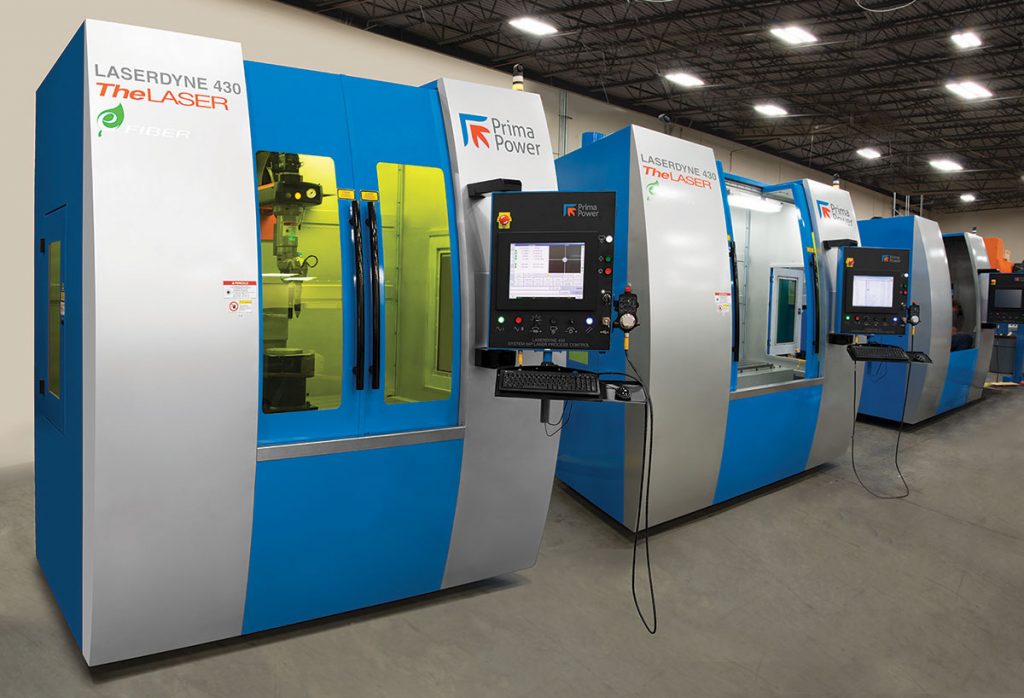 Prima Power Laserdyne announced that it will significantly increase production of its LASERDYNE 430BD laser systems in 2015 as a result of recent sales of the new system and of buying interest generated at the IMTS (USA) and EuroBLECH (Europe) exhibitions over the past two months.

“When Laserdyne saw the increasing serious interest in our new 430BD system and the possibility that this could result in longer lead times, we began planning for an increase in our production capacity,” reported Mark Barry, Vice President, Sales & Marketing for Prima Power Laserdyne. “Historically, Laserdyne has been able to offer short lead times for all our standard built laser systems. We developed this strategy to reduce delivery times over 30 years ago when most laser systems were custom designed and had long lead times.”

What has attracted interest in the LASERDYNE 430BD system is that it is capable of cutting, welding and drilling of 2D and 3D component parts requiring exacting precision at an affordable cost. The 430BD offers users great flexibility and options with multiple configurations for processing parts in various market segments requiring manufacturing flexibility, rapid prototyping and quick change overs.

“Our LASERDYNE 430BD demos at both the IMTS and EuroBLECH exhibitions, which highlighted the ability for cutting, welding, and drilling in a single system, drew serious interest from many market segments,” reported Mr. Barry. “These included manufacturers of medical devices, surgical instruments, automotive components, precision mechanical components, electronics, drawn, thermoformed, punched and traditionally stamped parts as well as aerospace component manufacturers. One reason is that the 430BD is capable of precision cutting, welding, and drilling a wide range of materials ranging from nickel alloys and stainless steel to aluminum, copper, and titanium. It is a highly efficient laser system that provides both operational advantages as well as key technical features associated with its small focused beam diameter, high beam quality, and system responsiveness.”

The LASERDYNE 430BD is a six-axis system designed for complex precision cutting, welding and drilling two and three-dimensional components. The system operates at speeds up to 800 inch/min in the X, Y, and Z axes (0-20 m/min) with bi-directional accuracy of 0.0005 inch (12.7 micrometer). This accuracy is throughout the system’s 585 x 408 x 508 mm work envelope, making it ideal for laser processing a broad range of workpiece sizes and thick and thin metals.

The LASERDYNE 430BD is a space-saving, small footprint system. It has Laserdyne’s latest and most powerful system controller, the S94P. It includes the full complement of Laserdyne hardware / software features for integrated control of the laser, motion, and process sensors. While the laser source is an important component of a 3D laser system, the full capability of laser processing is only realized when the laser, motion, and process sensors are fully integrated, a key feature of the 430BD.

“Laserdyne was one of the first integrated system manufacturers to offer fiber laser technology to our customers,” reported Mr. Barry. “We have advanced that technology with the new 430BD laser system and our industry leading fiber laser / system interface which is designed to meet the needs of today’s marketplace. We’re excited by the response to the 430BD and our ability to ramp production to meet those needs throughout 2015 and the years beyond.”