Bead on plate – A type of weld, typically used for initial process development, produced in a single thickness of the material to be welded. The bead on plate (or BOP) ‘weld’ does not include a weld joint. Bead on plate welds provide the developer a simplified tool for determining the laser and process parameters to produce a given weld penetration, geometry, speed, and microstructure.

Bottom bead – Laser melted material that is exposed at the backside (side opposite that on which the laser beam is incident) of a weld.

Butt joint – A type of weld joint in which the two metals to be joined are in the same plane. The two metals may be of the same type or different.

Coaxial gas delivery – A means of providing shield gas to the weld along the axis of the laser beam. 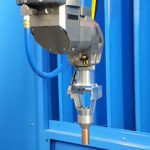 Collimator – An optical component of a laser welding machine that converts the uncollimated output of a laser or optical fiber into a collimated laser beam.

Conduction mode – A mechanism for laser welding, typically involving thin metals and lower intensity laser beams, in which melting occurs by conduction of laser energy from the absorbing surface throughout the material. In conduction mode welding, overlapping spots from a pulsed laser or the beam from a continuous laser is absorbed by the surface of the material and the volume below the surface is heated by thermal conduction producing a semi-circular cross section. This type of welding is usually confined to materials up to 2 mm thick.

Cover glass – a thin piece of optical material, typically glass for IR laser beams, placed between the focusing lens and workpiece to protect the lens from damage during processing. The cover glass is considered sacrificial, being much less expensive than the lens. The cover glass may be AR coated to minimize laser beam power loss (typically 2% per surface or 4% for a single thickness with two surfaces) or uncoated.

CW – An abbreviation for Continuous Wave, a form of laser output in which the peak power is constant (within a few %) with time. For CW output, the average power is equal to the peak power. For most CW laser sources, the output can varied from about 10% to 100% of the maximum average power rating. 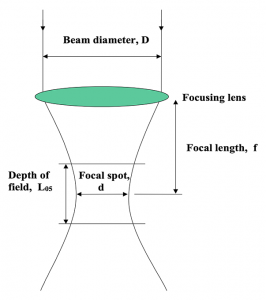 Edge joint – A form of a butt weld joint in which the surfaces of two thicknesses of material are placed in contact. See the illustration at the right. 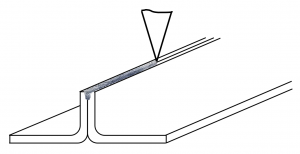 Filler metal – Metal added to a laser weld, typically in wire form, to control the geometry and/or microstructure and properties of a laser weld.

Fillet weld – A weld formed by joining two pieces of metal that are typically perpendicular to each other. The weld of the inside section of the joint (top image) is commonly referred to as a tee joint, while the weld made by melting through the vertical plate into the horizontal plate (lower image) is a lap or overlap weld. 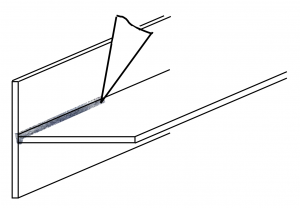 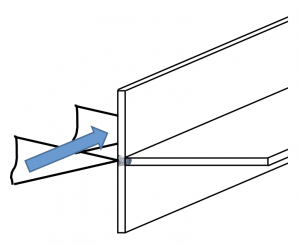 Focus – The minimum diameter of a focused laser beam. The focused spot diameter affects the maximum irradiance that can be achieved while the depth of focus influences the process working range.

Hermeticity is most often measured using a helium leak test.

Interface width – The width of the weld at the intersection of the two materials in an overlap weld.

Intermetallics – Compounds, typically brittle, formed by the reaction of two metallic constituents of the metals or alloys being welded. Intermetalliics are most commonly associated with welding dissimilar metals and alloys. The tendency for intermetallics to form in laser welding can be predicted by phase diagrams for the constituent elements. However, the high cooling rates for laser welding may restrict formation of intermetallics even though the phase diagrams, which are based on equilibrium (slow cooling) conditions, may indicate formation of these.

Keyhole – In welding, a keyhole is a cavity within the region of the laser beam surrounded by molten metal. The cavity moves as the laser beam moves relative to the weld joint and molten metal from the keyhole fills in the cavity. Keyhole welding provides capability for high aspect ratio (high depth to width) welds

Laser – An acronym for Light Amplification by Stimulated Emission of Radiation.

Modulation – Output from continuous wave lasers that is varied from a nominal (average) value with time. Modulation typically involves square or sine wave variation of average power at rates of several hundred cycles per second. Modulation controls heating and cooling of the weld metal. Modulation minimizes the tendency for solidification cracking in aluminum alloys and reduces the tendency for formation of brittle intermetallics during the dissimilar material welding.

Overlap weld – A weld formed through two or more thicknesses of material lying on top of each other. In an overlap (or lap, for short) joint, the laser beam melts through the top material into the lower materials.

Plasma – In the context of laser processing, including laser welding, the plasma is a cloud of high temperature gas formed by the interaction of a focused laser beam, gas in and around the area, and laser melted material. The plasma can partially or completely block the laser beam from reaching the material.

Porosity – A weld defect characterized by a void within the weld metal. Porosity most often represents gas from the environment (e.g. water vapor), contaminants (e.g. lubricants, surface oxides, gases dissolved in the parent material), or from shield gas that is trapped within the weld. Laser welds are commonly inspected for porosity using X-ray radiography, a non-destructive inspection method.

Power Density – Optical power per unit area. For laser welding applications, the relevant power density is typically that at the intersection of the laser beam and the absorbing material.

Pulse – An individual packet of energy produced by a pulsed laser.

Pulse energy – The energy produced within an individual pulse from a pulsed laser or burst from a CW laser.

Pulse frequency – The number of laser pulses output per unit time, usually expressed in pulses per second or Hz.

Pulse shape – The distribution of peak power vs. time within a single pulse. Pulse shaping is used to control heating, absorption, cooling – all aspects of the thermal cycle produced by the output of a pulsed laser.

QCW – An abbreviation for Quasi Continuous Wave. The output from a QCW laser may be in the form of continuous wave (CW) or as a pulsed output with limited duty cycle.

Shield gas – Gas supplied around the area of the welding during laser welding to protect the weld metal and metal within the heat affected zone from effects of the ambient environment. For more information about the types of shield gas used in laser welding, see Selecting and Delivering Shield Gas in Laser Welding.

Shoe – A means of delivering shield gas to a laser weld through a structure that creates a shield gas rich environment both in front and behind the weld, as well as at the weld area, to ensure coverage of the material until it has cooled to a temperature at which the ambient environment will no longer affect it. 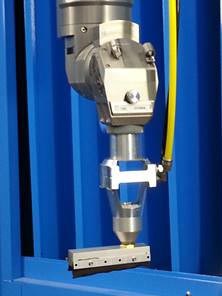 Side pipe – A means of delivering shield gas to a laser weld by supplying it through a solid tube oriented at a shallow angle to the surface of the weld joint. The side pipe is designed to blow a plume that would otherwise form above the weld away from the focus point to minimize the effect of the plume on the laser beam.

Spatter – Laser melted material ejected from the weld fusion zone and re-attached to the surface of the part.

T-joint – Weld joint in which two components are joined perpendicular to each other in the form of the letter ‘T’.

Top bead – The portion of the weld on the surface at which the laser beam is absorded.

Under bead – The bottom portion or backside of the weld.

Weld penetration – The depth of the weld fusion zone into the material.