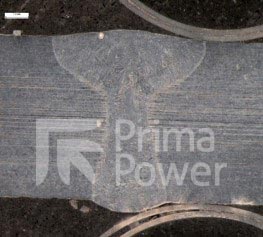 Austenitic (300 series) stainless steels have applications in a wide range of industries because of their formability, resistance to oxidation and corrosion, and high toughness at cryogenic temperatures. Laser welding has been used to produce high quality, high strength welds in these alloys for decades.

However, the weldability of these alloys is not all the same, that is, some are more prone to hot cracking than others. Fortunately, some empirically developed guidelines are available for evaluating the weldability of stainless steels.

The tendency for weld cracking decreases significantly when some delta ferrite (a phase, or arrangement of atoms, within the microstructure of the stainless steel) is allowed to form within the primarily austenitic phase during the cooling of the weld metal. Ferrite formation is in turn influenced by both the composition of the weld metal and by laser process parameters that influence solidification and cooling rates of the weld metal.

For example, the alloying elements chromium, molybdenum, silicon, niobium, and titanium promote the formation of ferrite. The alloying elements nickel, manganese, copper, carbon, and nitrogen – the latter two which can also be introduced in the welding process from contamination or shield gas – promote the formation of the austenite phase. Researchers have documented the ratios of these elements that produce a sufficient amount of delta ferrite to avoid cracking. These rules can also explain the reason that certain platings, such as nickel plating with small amounts of sulfur, can promote cracking in an alloy that is otherwise not prone to cracking.

Cooling rates associated with laser welding, which are generally high with respect to other welding processes, also influence the structure of the weld metal and it’s corresponding tendency to crack. Research has shown that the high cooling rates associated with laser welding and the corresponding rapid solidification rates reduces the amount of delta ferrite formed in the weld.

For additional information about welding 300 series stainless steels or, for that matter, any material, contact LASERDYNE sales at lds.sales@primapower.com.