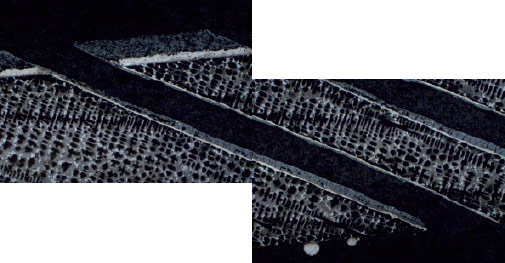 Nickel-based superalloys make up approximately 40-50% of the total weight of an aircraft engine. These alloys are used most extensively in the combustor and turbine sections of the engine where high temperatures are maintained during operation.

For critical components such as turbine blades and vanes, cast nickel-based superalloys are preferred over wrought alloys because the composition of wrought alloys are restricted by the hot workability requirements. Casting compositions can be tailored for good high temperature strength as there is no forgeability requirement. Furthermore, cast components are stronger than forgings at high temperatures, due to the coarse grain size of castings.

The most commonly used cast superalloys include:

Most of the cast nickel-based alloys used in blade and vane applications exhibit a relatively high susceptibility to microcracking in the recast layer during laser drilling. Recast layer microcracks also have a high tendency to extend into the parent material as shown in Figure 1. 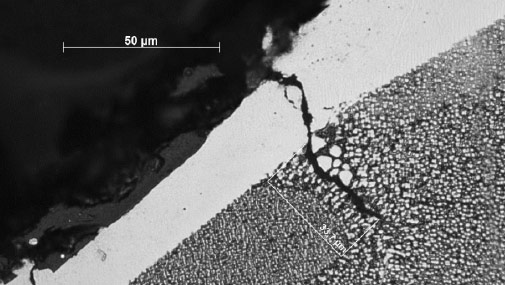 Drilling tests were carried out with 6mm thick TBC coated Inconel 792SX single crystal nickel-based superalloy (Figure 2). The samples were sectioned, polished and electrolytically etched in Oxalic acid for 5 seconds to examine the laser drilled hole quality. Some results from the findings are highlighted in Figures 3-4.

Figure 4: Magnified areas of 1 and 2 from figure 3. The average recast layer thickness 45.5µm; average oxide layer 110µm with highest thickness 143.6µm; no base metal cracks; no delamination of TBC.

Laser drilling of TBC coated Inconel 792SX superalloy was carried out with varying laser and processing parameters at 30 degrees to the workpiece surface. Main conclusions from the laser drilling study are:

Would you benefit from help in developing a new drilling application or in improving an existing one? If so, contact us at lds.sales@primapower.com.

If this article was of interest…

If you found this article interesting, you may also want to read the following articles from Prima Power Laserdyne.