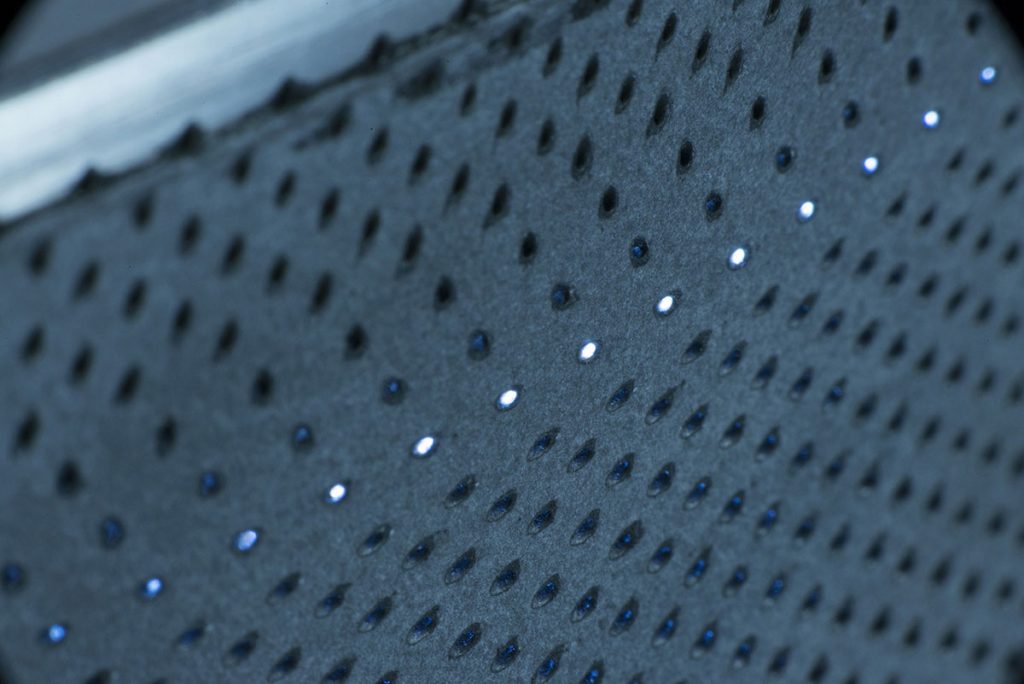 Laserdyne’s exclusive CylPerf™ is used to create complex patterns of laser drilled holes using trepanning, static percussion, and “on-the-fly” drilling. Pictured is a pattern of 0.4 mm diameter holes at 30 degrees from the surface. The latest version of CylPerf with advanced fiber laser control reduced the time per hole from 1.2 seconds to 0.3 seconds.

“On-the-fly” drilling has historically been associated with the shortest cycle time for drilling sheet metal components but with a compromise of hole consistency. Now, incorporating the results of the latest process R&D performed at Prima Power Laserdyne and new capability for fiber laser control, “on-the-fly” drilling is producing higher quality holes, both in terms of metallurgy and geometry, with the benefit of reduced cycle time.

CylPerf™, short for cylinder perforation, is a graphical software utility for programming and processing cylindrical components such as components for turbine engine combustion chambers. It can be applied to “on-the-fly” percussion drilling as well as static percussion drilling and trepanning, including a combination of these within a part and even within a section of a part. The latest version of CylPerf incorporates advanced fiber laser control which is unique to LASERDYNE systems.

On-the-fly percussion drilling is a proven process for producing small diameter (0.2 to 0.6 mm) holes. Both Nd:YAG and fiber lasers can drill these holes at steep angles and process difficult-to-machine materials. Thousands of holes can be produced quickly over a 3D surface in a single setup.

Prima Power Laserdyne recently demonstrated capability of the latest version of CylPerf in drilling a thermal barrier coated (TBC) Hastelloy® X (a registered trademark name of Haynes International, Inc. and standard aerospace engine combustor material) component. The material was 1.5 mm thick with 0.4 mm diameter holes drilled at 30 degrees from the surface. This new process required only 0.3 seconds per hole compared to the previous process which required 1.2 seconds per hole.

Laserdyne reports that with traditional, static percussion drilling in which the laser beam is stationary during drilling, 0.5 seconds is required to drill each hole of this diameter, depth, and angle. However, the challenge with static percussion drilling is that even in this short process time, the material is heated which can lead to delamination of the TBC. The thinner the TBC material, the more susceptible it is to delamination. Using the CylPerf “on-the-fly” drilling process in which one laser pulse is delivered in each revolution of the part, cooling between laser pulses minimizes delamination.

Developing and optimizing laser process parameters for any new combustor drilling application can be both time consuming and expensive, especially considering the cost and availability of test pieces. Laserdyne application engineers developed a technique for optimizing CylPerf parameters using relatively small, flat samples instead of finished parts. These test “coupons” are mounted to the laser system rotary table in the same orientation of the actual part when it is eventually drilled.

The technique makes use of tools (such as laser drilling calculators) that accurately simulate the use of mapping and CylPerf “on-the-fly” drilling parameters, and other laser process parameters. This technique has been proven to be effective in developing parameters that can be transferred to real-world parts with equal results in the final laser drilled components.

“This technique was used on the above described Hastelloy X component,” reported Terry VanderWert, president of Prima Power Laserdyne LLC. “By using multiple coupons at a far lower cost than the actual workpieces, this method allowed for multiple iterations of process parameters that lead to a reduction in process time per hole from 1.2 seconds to 0.3 seconds. As a result, total developmental time and cost were significantly lower than previously experienced.”

CylPerf is one of many significant advancements to Prima Power Laserdyne’s multi-axis fiber laser systems. It is a standard feature within the S94P control on Laserdyne’s 3 to 7 axes systems which include the LASERDYNE 795 and LASERDYNE 430BD systems.