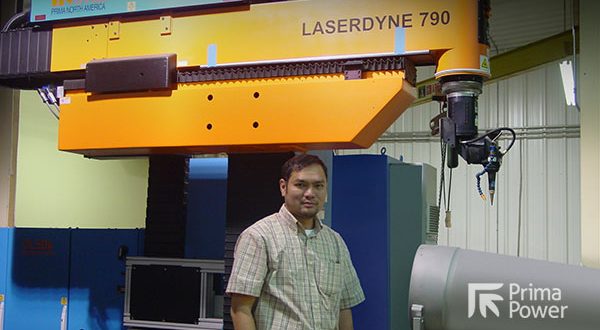 2017 will mark the 20th anniversary of TL Precision Welding, Inc. (www.tlprecision.com), a supplier of precision laser drilling, welding and fabrication services “for high-technology manufacturers in energy, aerospace, medical, automotive and engineering”. They are also a LASERDYNE system user.

TL Precision was founded in Houston, Texas in 1997 by Quang Tran, a graduate of Texas A&M University. In its earliest days, the company provided services including welding, sandblasting, and grinding for repair of industrial gas turbine components such as transition ducts, baskets, and floating seals.

As laser drilled holes became increasingly important in the design of industrial gas turbine components, TL Precision saw the opportunity to add laser cutting and drilling services to its portfolio.

TL Precision’s priority from its earliest days was on meeting the strict metallurgical and geometric requirements of the components being repaired while completing orders quickly. Fast turnaround is especially critical for repair operations since a main goal of the owner of the turbine engine, no matter whether for aerospace or power generation applications, is to return the engine to service as quickly as possible.

Once these objectives – quality and turnaround – had been met for a given process, they then turned their attention to continuously improving the process. The goal of improvement efforts was to reduce the cost of the process in order to perform the services for their customers as economically as possible.

In many ways, repair is more challenging than processing new components. Laser drilled cooling holes 0.5 – 1.0 mm (0.02 – 0.04 inch) must be drilled in the same location and at the same angle to the surface as in the new parts. The process must consider that the parts may have material deviations or have changed shape from their original conditions due to extreme operating conditions including high temperatures.

Achieving consistent quality requires precise control and precise motion. It also requires skilled operators who understand the machine and the process and can make adjustments ‘on the fly’.

That is where the loyalty and longevity of TL Precision’s staff comes in. Years of service in the company are high with the core team having been in the company since shortly after its formation.

“We were very green when we started out with laser technology,” says Mr. Tran. “Without even much experience in the area of machining, it was like starting with a blank piece of paper.”

Today, the situation is much different. The staff has gained significant experience in laser cutting and drilling turbine engine parts over the 13 years using the LASERDYNE 790 systems. They are ready and able to take on new challenges.

Tran is currently focused on growing the business by leveraging their experience and capability from industrial gas turbine (IGT) repair into aero-engine component processing, both for new component manufacturing as well as for repair.