The pace has quickened as the aerospace industry prepares its manufacturing processes for the new engine designs that will go into widespread use later in this decade.

Leading jet engine manufacturers all have major new engine programs underway. With an average of twenty years using the present engine designs, turbine engine manufacturers (TEM) are entering into the next twenty year cycle with an array of exciting new engine designs. Combustors are a key component for these engines requiring high temperature metals with increasingly complex shaped components containing thousands of effusion (shallow angle to the surface) cooling holes. As the next generation of engines enter into production, combustors and adjacent hot section components for these engines will require more advanced laser processes and precision equipment to handle the increased complexity of these components.

“Combustor design and manufacture in turbine engines are key to an engine’s fuel efficiency, environmental footprint, and lifetime,” reports Terry VanderWert, President of Prima Power Laserdyne “Cooling in earlier combustor designs was based more on combustor ‘hooks’ and the simple geometry of EDM holes for cooling. As the improved designs of the last 20 years were pressed into service they allowed engine components to operate at higher and higher temperatures. The newer combustors are being fabricated with proprietary thermal barrier coatings and with denser patterns of smaller diameter and advanced designs of shaped holes for more effective cooling. For these designs, aerospace engine manufacturers have seen the need for the latest laser processing technology along with precision placement of the beam on the workpiece and we are glad they have asked Prima Power Laserdyne and our product range to play a role.”

For over three decades, TEM’s have used LASERDYNE systems for multi-axis laser processing work as these systems have continually proven to be the best technology available to process high temperature aerospace materials. By adding newer systems over the years and taking advantage of Laserdyne’s willingness to upgrade their products with the latest software and hardware enhancements, these aerospace manufacturers have continually kept current with requirements. For example one manufacturer presently has generations of LASERDYNE products in production including three LASERDYNE 795 systems, the current flagship in the LASERDYNE product line, four LASERDYNE 790 systems and one LASERDYNE 890 gantry system. These systems incorporate Nd:YAG and CO2 lasers and are used for drilling and cutting the many designs of aerospace combustors including those with special coatings.

Now that is changing. Laser processing is moving in a new and exciting direction. The company headquartered in Brooklyn Park, MN is now delivering the new LASERDYNE 430 BeamDirector® (430BD) system equipped with a high power fiber laser. In the hands of the TEM and their subcontractors, these systems are being used to validate new processes as well as increase productivity on existing parts. Some of the processes are being developed in collaboration with Prima Power Laserdyne. 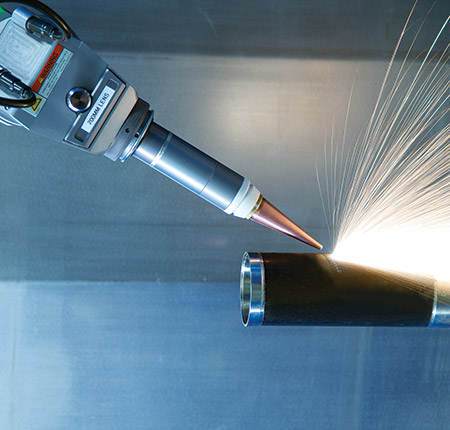 “An increasing number of LASERDYNE customers are investigating and quickly embracing the use of our approach to fiber laser technology including OEM and tier one TEM suppliers in Europe, Asia, and North America,” reports Mr. Mark Barry, vice president of Prima Power Laserdyne. “One European aerospace engine manufacturer is in the process of taking delivery of our new LASERDYNE 430 BeamDirector® (430BD) laser system. This is in addition to six older Laserdyne systems it currently uses. This company supplies customers across four continents including Airbus, Boeing, Bombardier, Canadair, Embraer and Superjet. The new fiber laser is on a six axis system and the will provide the means to create new manufacturing processes while improving existing ones. Also, the system utilizes an entirely new manufacturing platform that makes more efficient use of floor space”

Used in many commercial aircraft such as the Airbus A318.

Laserdyne’s approach combines its proprietary motion and process control with the beam quality and energy control of fiber laser. This has been shown to yield advancements in cutting, drilling and welding, reports Mr. Barry. “Not only is this combination significant for aerospace manufacturing, it is important for all industries that have the need for precision laser processing” he stated. 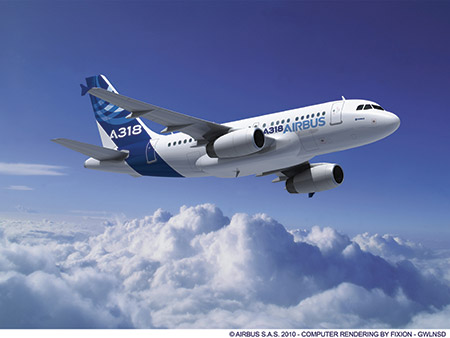 The system is capable of cutting, drilling and welding and has distinct advantages over older systems.

“Laserdyne is not an expert in turbine engine design but we have played a part in this industry for over thirty years. Cooling holes in the next generation of engines will be even more design specific than they are in the current engine designs,” reports Mr. VanderWert. “Cooling holes will be different in ways that will promote longer engine life and reduced fuel use and emissions. Current engines are very good in these critical areas now but the new engine designs will be dramatically better.”

What does the new generation of processing systems with fiber lasers mean for aerospace engine manufacturers and subcontractors?

While the fiber laser allows manufacturers the ability to duplicate existing processes that have been developed on a system using a Nd:YAG laser, it also provides the capability to increase productivity and in many cases quality for these existing designs and to develop processes for new designs that could not be realized reliably or cost effectively using Nd:YAG laser processing. Here’s how:

While aerospace engines in some cases are growing in size, as does the size and carrying capacity of the planes themselves, controlling the number and smaller diameter of cooling holes is an important consideration in these engines. The complex shape of these holes in irregular patterns in contoured high temperature parts can be produced more accurately at higher speeds with fiber laser systems than with older Nd:YAG systems. 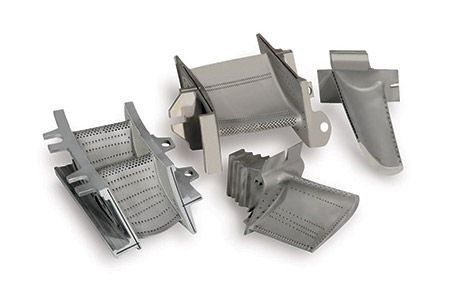 Aerospace turbine engine “hot engine” components like these show examples of the complex holes increasingly required in many smaller shapes and patterns. LASERDYNE 430BD fiber laser system for the first time provides cutting, drilling and welding in a single system.

With higher average power for fiber laser, the pulses used to produce a smooth cut, drill an array of holes, or produce a seam weld by a series of overlapping pulses can be delivered at higher rates allowing higher throughput. In one case for example, cutting and trepan drilling (producing a hole by cutting the circumference) in a 3 mm thick high temperature alloy using a fiber laser is more than 3x faster than with a Nd:YAG laser. 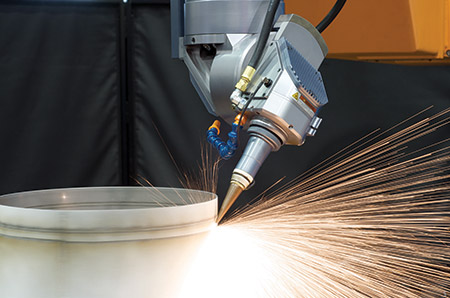 This higher processing speed not only provides lower cost in manufacturing existing designs, it makes possible use of fiber laser where Nd:YAG laser processing was previously uneconomical.

3D processing systems with fiber lasers are providing flexibility for laser cutting, drilling, and welding of both two and three dimensional components with little to no change over. These systems are designed with standard features (e.g. database of laser parameters for commonly processed materials) making development and setup of new processes straightforward. These latest laser systems provide advanced controls and software for consistency of manufacturing processes. Fiber lasers eliminate the need for tuning to obtain power and beam quality changes over time due to aging flashlamps. Also, these systems in many cases eliminate the need to change optics when switching between cutting and welding (skill dependent).

A “Big Swing” Toward The Latest Laser Technology

Multi-axis laser processing with fiber lasers not only provides new capability and versatility important to aerospace manufacturers, it also means that older, less reliable equipment now can be replaced with maintenance free laser systems that do more and provide the capability for higher quality work.

Cooling hole design and manufacture hold the key to aerospace engine efficiency. Next generation engines call for denser cooling hole patterns and more complex holes. These cooling holes are very small, 0.5 – 0.75 mm diameter, at acute angles to the part surface. Only next generation laser systems can efficiently and economically produce these hole patterns.

To achieve the higher levels of engine operating efficiency, one aerospace engine manufacturer said that new manufacturing processes probably will likely be adopted “across the board”. For this reason, the last two years were important capital investment planning periods in which a “big swing” occurred toward this newest technology to produce the new engines. Fiber laser technology, and all the features that Laserdyne brings with it in the new LASERDYNE 795 and 430 BeamDirector fiber laser systems, will no doubt improve the laser processing landscape for decades to come.

Another aerospace engine manufacturer said they want the latest technology to manufacture combustors and other hot section components for their next generation engines. They said they didn’t want to rely on 15-20 year-old equipment. So, they have begun a major examination process of what they have, what was needed and what is available that can add quality and operating efficiency to these new engine designs and processes to manufacture them.

While the addition of multiple new laser systems incorporating the latest technology is anticipated, entire facilities are also a part of the planning process. Older laser systems and manufacturing approaches will be used for decades to come to produce existing designs. Aerospace manufacturers as a group are adopting an open mind to the new technology from any and all manufacturers. The analysis and planning is all encompassing and goes far beyond just the laser portion of the manufacturing process.

While industry generally looks 2 to 3 years out for planning volume and capacity, the aerospace industry goes to a lot of effort planning ten plus years, in this case, to 2024 and beyond. The planning anticipates capital needs, building facilities, equipment and technology needs and many other components associated with it. A huge swing occurs when taking a large volume of engine production and switching it over to a new design. So aerospace engine manufacturers spend a lot of time and planning resources for supporting this change. Along with this is the testing of the new processes, including Laserdyne’s new technology, to ensure it is the correct technology along with everything else that contributes to the equation to support it. 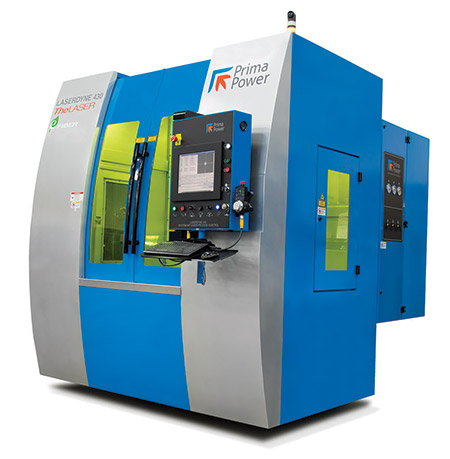 Six axis LASERDYNE 430BD system is designed for cutting, welding and drilling 2D and 3D components with up to 20 kW QCW fiber laser.

With higher velocity and acceleration using less power while improving precision and accuracy, the third generation BeamDirector® (BD3Y) used on these new systems have the exclusive LASERDYNE contouring head design with C (rotary) axis motion of 900 degrees, and D (tilt) axis motion of 300 degrees. Among its many features is a direct drive design, advanced optical encoders for improved accuracy and repeatability, higher assist gas air-flow, adjustable mirrors for easy and accurate beam alignment.

According the Mr. Barry, “Customer’s new 430BD systems will use the LASERDYNE S94P control which includes a full complement of standard hardware and software features. These include Automatic Focus Control™ for capacitive part sensing, patented Optical Focus Control (OFC) for sensing of thermal barrier coated surfaces, ShapeSoft™ software for programming shaped holes, Breakthrough Detection™ for drilling clean, consistent holes with the minimum number of pulses, mapping, and numerous additional software and hardware features. This control familiar to many present LASERDYNE equipment users will also allow the customer to use programs created for different Laserdyne systems with little or no modification.

The LASERDYNE 430BD operates at speeds up to 800 inch/min in all axes (0-20 m/min) with bidirectional accuracy of 0.0005 inch (12.7 micrometer). This accuracy is throughout the system’s 585 x 408 x 508 mm work envelope, making it ideal for the demanding process validation requirements and reliability concerns of aerospace customers. Accuracy of these new systems is certification to ISO 230-1:1996 and 230-2:2006 in accordance with Prima Power Laserdyne’s standard accuracy and repeatability test procedures.

Laserdyne’s approach combines its proprietary motion and process control with the beam quality and energy control capability of fiber laser processing. This has been proven to yield advancements in cutting, drilling and welding, reports Mr. Barry. “Not only is this combination significant for aerospace manufacturing, it is important for all industries that take advantage of laser processing,” he stated. “Many new laser system advancements, not yet announced, will add to the improvements in future aerospace engine manufacturing. Watch for them … they will be exciting!